Todd Giffen is an odd character who according to his own statement has friends in military intelligence.

Todd Giffen’s very first email to Dr Horton already started with sexual harassment. He wrote to her stating that “it makes [his] pussy wet” (!) that Dr Horton is an Oxford/CERN physicist and that he “would love to cuddle up” with her in a “superconducting magnet coffin”. He sent the same email three times, adding the variation that he wanted to “hook up with [Dr Horton’s] brains to see if [they]’re a match to make it happen”.

The reference to hooking Dr Horton’s brain up with someone else’s is such an unusual phrase that it can only be understood to be cartel-signalling given that in the illegal brain-interference projects of the military and the intelligence agencies victim’s brains are hooked up via radio-frequency implants in the skull (which can be measured in Dr Horton) via the telecommunication network to other people’s brain via a super-computer.

The fact that the email was sent three times can also hint at cartel-signalling. (The number 3 has meaning for the intelligence agencies and is used in cartel-signalling, as was pointed out by Dr Rauni Kilde, the former Chief Medical Officer of Finnland.)

In a subsequent email just a few hours later, and having not received a reply from Dr Horton, he continued elaborating stating ” I feel so many millions of beams creating the sensation of sucking on my dick the perfect invisible hologram. […] It feels like the most perfected quantum manipulation”. 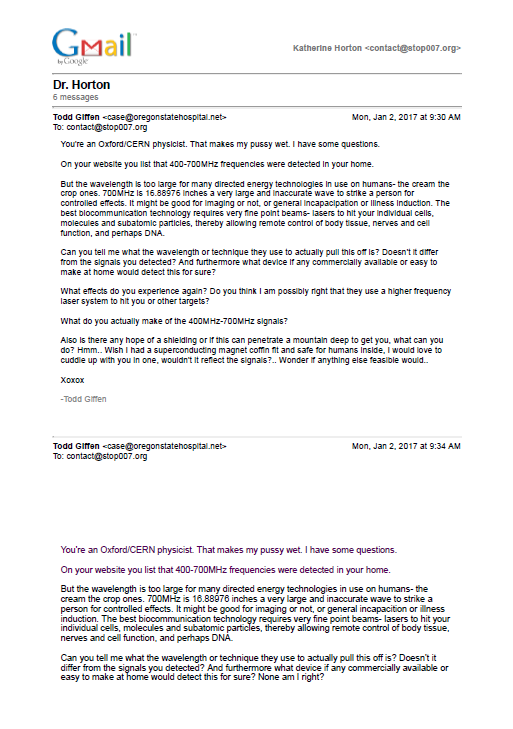 A day later, Todd Giffen sent an email to Dr Horton without further comment. The email contains text that appears to be a witness statement by someone called James Fry from the Military Intelligence of the 82nd Airborne Division. However, it was not signed or scanned but simply typed as text in the email. Needless to say, this did not reassure Dr Horton but rather was taken by her as further evidence that Todd Giffen had close links to Military Intelligence.

Less than two weeks after this incident, he wrote to Dr Horton again stating that he wanted to “come to Germany” and was asking if Dr Horton “got a spare bedroom or a floor [he] could sleep on”.