Child abuse whistleblower who has been brutally abused by the UK court system. Melanie Shaw is a witness who reported the abuse and murder of children at Beechwood Childrens’ Home Notthingham. The UK Column published a good summary of Melanie Shaw’s case when she was sentenced by a secret court on mysterious secret charges for 2 years in prison in January 2017, a sentence of which she spent most in criminal solitary confinement as a tool of illegal torture. Her case shows the tell-tale signature of being a victim of British Secret Services as she suffered:

The probability of all these offences happening to a single person “by chance” are statistically impossible. Only MI5 can orchestrate such vast criminality around a victim.

On 17 June 2018, Dr. Horton received a message that Melanie Shaw was not released according to the terms of her imprisonment. 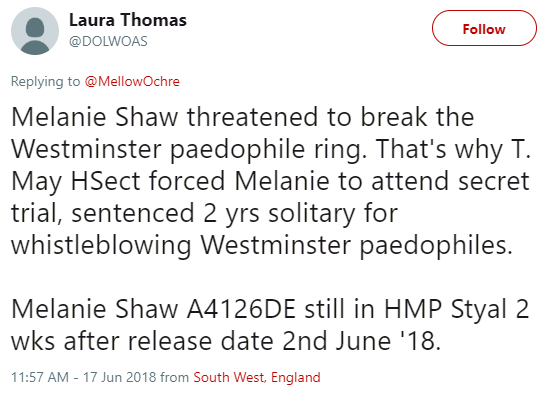 Subsequently, Dr. Horton sent an email to the Offender Management Unit at HMP Styal. See the correspondence that ensued below in the next section.

Dr. Horton and two other people called Leeds Crown Court repeatedly on 29th July to enquire if there is indeed a court hearing for Melanie Shaw on the 2nd July 2018. All three experienced that the Leeds Crown Court phones lines were permanently busy. See below for the evidence of the 10 unsuccessful calls from one of the callers.

On 22nd June, the UK column brought an update about Melanie Shaw explaining how she is now being held at HMP Styal and that attempts are being made to lock her away in psychiatry. This news item was discussed by Brian Gerrish, Mike Robinson, David Scott and Robert Green on the UK Column, see below (18:10-25:45min).

The news reporting shows evidence in the form of the release notification that Melanie Shaw’s release date would have been the 2nd of June 2018. 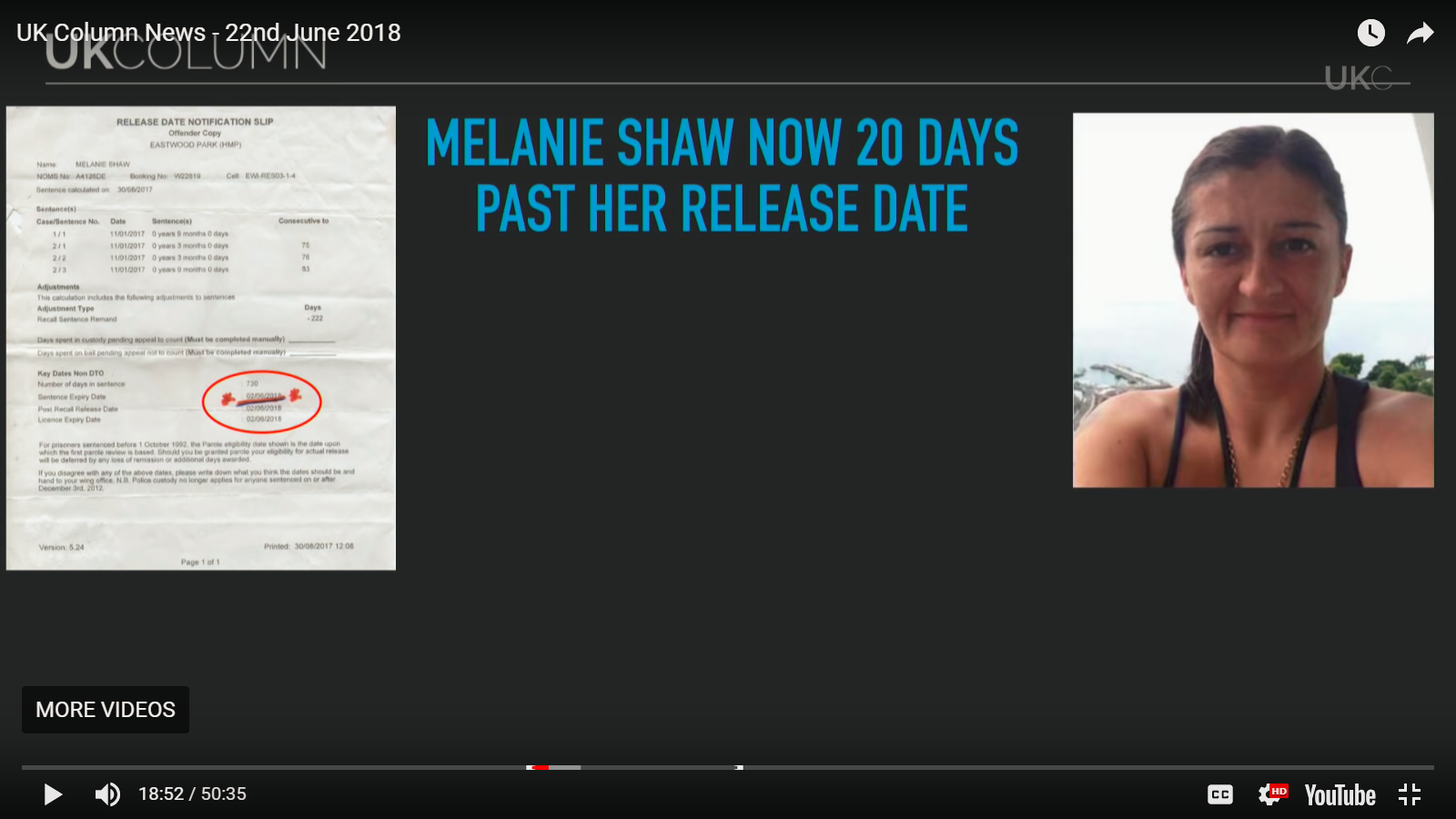 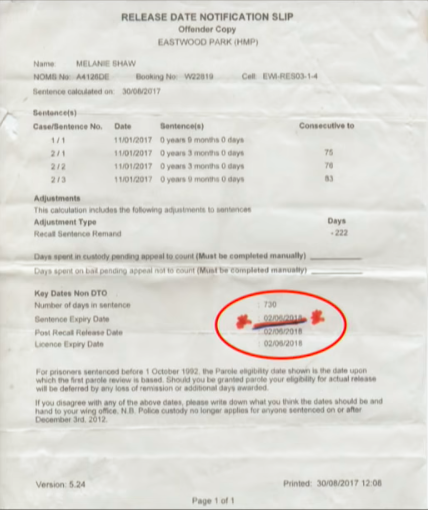 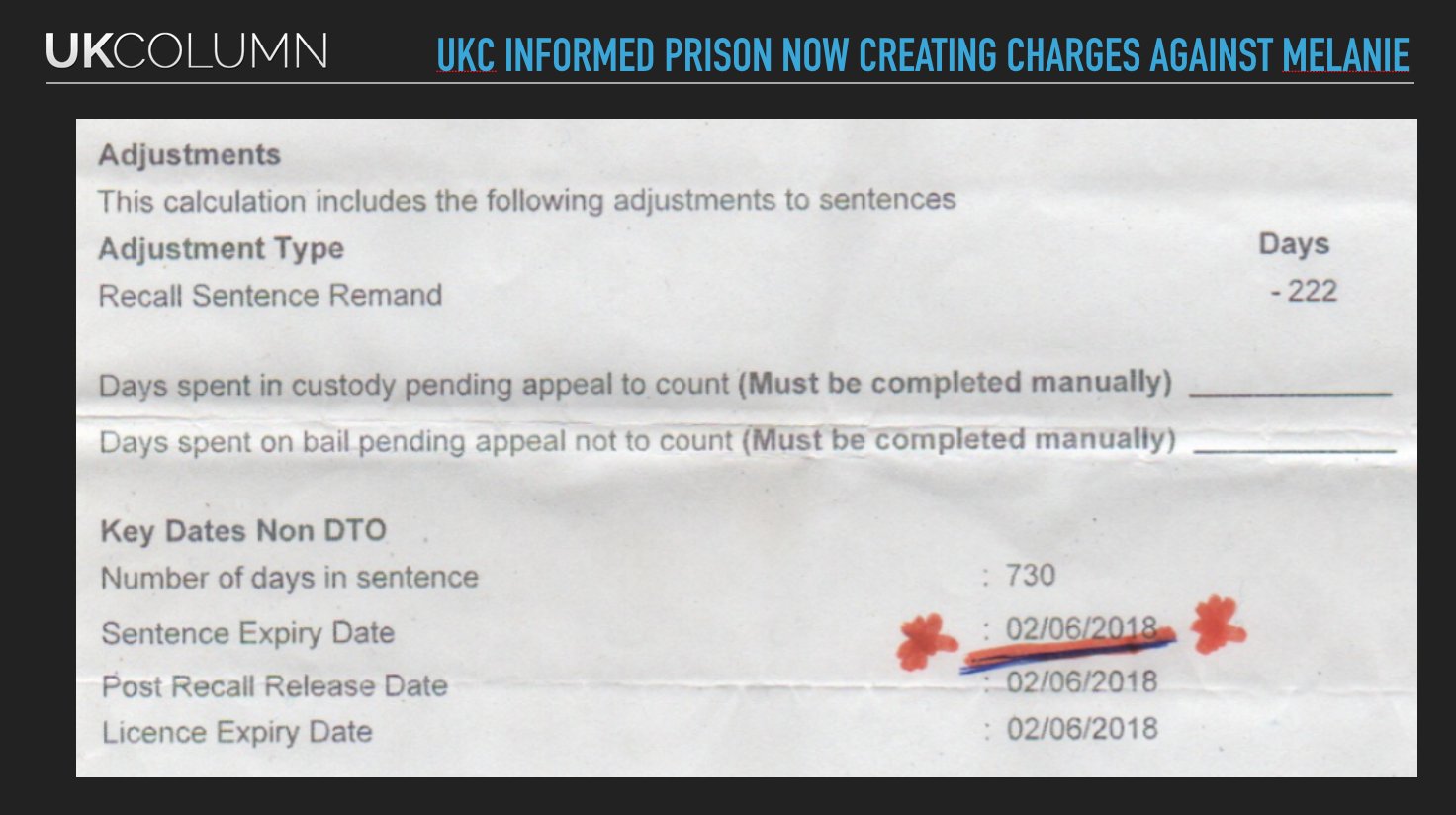 Dr. Horton has also been made aware by someone who has correspondent several times with Melanie Shaw that she was

Furthermore, there are indications that the State agenda is now to have Melanie Shaw committed to “psychiatric care”.

It is also noteworthy that Melanie Shaw had to sack her legal team because they were not representing her, not protecting her and not taking her instructions. The judge then simply appointed another team without Melanie having a say in the matter. In fact, Melanie Shaw did not want that team and the lay legal team who she wanted has been kept out of her prison by the judge.

This is a clear indication of pre-arranged show trial and reeks of the cartel operation of the courts and legal chambers that could also be observed in the case of Frederic Laroche and Siegfried Tomys.

The corruption of judges and the legal teams representing Melanie Shaw is something that only the Secret Services can achieve with such ease, and it is something that they appear to do as Standard Operating Procedure (of organised crime).

The fact that this comes as brutal and psychopathic retaliation for Melanie Shaw’s revelations of child abuse and child murder at Beechwood Childrens Home Nottingham also implies that MI5 is orchestrating these crimes against Melanie Shaw.

Furthermore, the ruthless sense of empowerment by those criminal prison staff imply that they feel entitled and protected from a high up powerful place above and including the prison directorship.

For these reasons, Dr. Horton considers Melanie Shaw to be a victim of MI5 and therefore her case is of interest to the Joint Investigation Team and is also directly relevant to Dr. Horton’s case.