LIVE Public Broadcasts about the Investigation

The Cartel of Degenerates

The Joint Investigation Team was founded by Dr. Katherine Horton at the start of 2017. The Team is a collaboration between researchers in the US and Europe and investigates crimes committed with directed energy weapons, military neuro/biotechnology, as well as the systemic corruption that facilitates the use of these weapons on the civilian population by the military-intelligence-police syndicate.

The website of the Joint Investigation can be found at https://jointinvestigation.org. 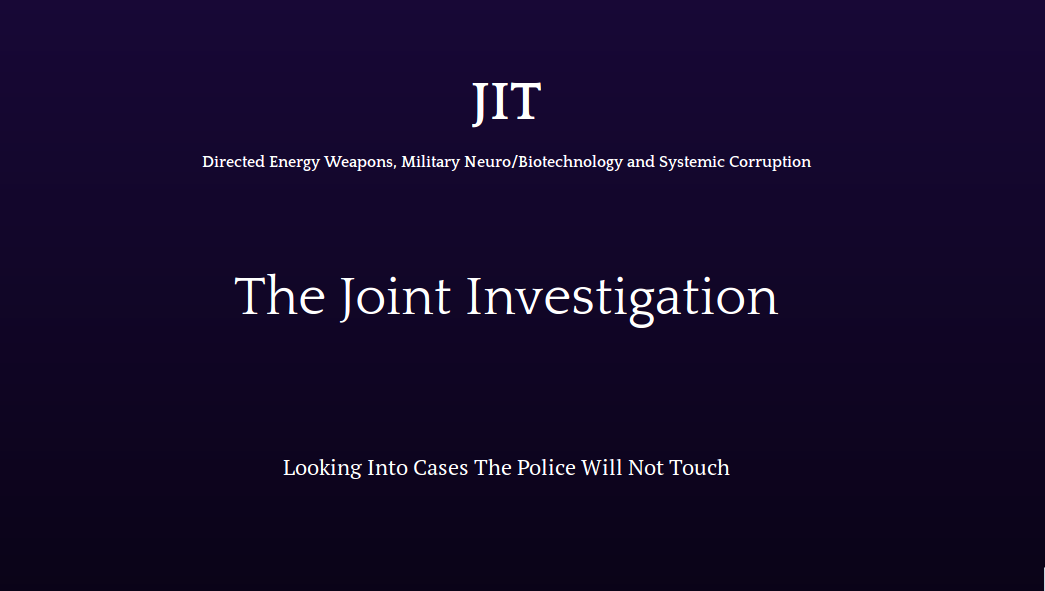 The Reports published by the Joint Investigation Team will appear on that site in the course of the investigation. It will cover the different aspects of the crimes committed by the intelligence agencies and corrupted law enforcement, as well as the details of the integrated weapons system used against civilians.

The Team comprises a group of core experts who all have personal experience of assaults with directed energy weapons and military neuro/biotechnology. Behind the scenes, the Team is also working with microwave weapons experts, former intelligence agents, scientists and medical professionals to advance the investigation.

For a detailed listing of the Team members see https://jointinvestigation.org/about.

For the purposes of informing the public around the world about these modern crimes and to ensure the complete transparency of the international criminal investigation, the Joint Investigation Team broadcasts live updates weekly. The Techno Crime Fighters’ Forum is broadcast live in English on Thursdays at 4pm UK time (GMT) / 5pm Central European Time (CET) / 11am US East Coast Time (EST) on the Ramola D Reports or the Stop 007 YouTube channel (depending on which one is less sabotaged by the Secret Services). Subscribe to those channels to get live reminders. Forum episodes are always viewable after the show on Dr. Horton’s Stop 007 channel.

Techno Crime Fighters’ Forum was founded by Dr. Paul Marko, an Organisational Psychologist and Investigative Journalist, in March 2017. Sadly, Dr. Marko passed away unexpectedly on 6th February 2018 before the first anniversary of his project. The Joint Investigation Team proudly carries on his work.

There is also a German-language version called Techno-Kriminalermittler. Both broadcasts have a live-chat where members of the public can ask questions.

Read more about these shows.

The German-language version Techno-Kriminalermittler is broadcast Fridays at 6pm GMT / 7pm CET / 1pm EST. Subscribe to Stop 007 on YouTube to get live reminders.

The Cartel of Degenerates

Why is this criminal investigation necessary?

The model that we have of the intelligence agencies and the military does not correspond to reality. In most cases, it is an idealised image that they themselves created. What this means is that the assessment of the most powerful organs of the state have been left to infiltrators, saboteurs, con-artists and (professional) serial killers who are all trained in psychological operations.

It is important to correct the mental image that we have about them in order to be able to assess victim reports and to decide how much power they can be given and what safeguards these groups of people should have.

A system that is as opaque as the military or the intelligence agencies can still be accurately assessed based on victim reports and circumstantial evidence. There are also many scientific tools, for example data analysis techniques and statistics, that can be used to assess data on organisations and individuals. In the 21st century where data collection is pervasive, we therefore have a lot of handles on the work of the intelligence agencies and their agents to an extent that was not possible just a few years ago and that they themselves are not aware of.

The outcome of such analyses is truly shocking. Instead of heroes fighting for “national security”, the military and intelligence agencies appear infested with criminals, psychopaths and people with severe mental illness and criminal sexual perversions.

There are several processes that bring this about. On the one hand, the secrecy and compartmentalisation allows all of those undesirables to live out their predilections. This attracts those people in large number, which leads to a so called selection bias. On the other hand, the goals and methods of the organisation actively foster or even require ruthlessness and other undesirable traits. This leads to cultural reinforcement whereby such traits are imprinted on people of otherwise normal disposition. This happens through psychological processes like peer group pressure and the Milgram effect. When these processes are at work in an organisation for several years, a toxic culture develops and becomes so all-pervasive.

The close bonding that develops among people through the experience of dangerous situations further entrenches the culture and leads to the development of a close-knit community of people of very similar disposition. It is through these processes that a status quo has developed in which it appears accurate to describe the military-intelligence complex as the Cartel of Degenerates.

Why conduct the investigation outside the police services?

The most horrific mutilation and extermination programs in history were without exception due to the secret services and the military. In the cases where these organisations undertook large-scale criminal endeavours, the police and all other law enforcement agencies partook in the criminality. Examples of this abound in every decade of the 20th century. Western secret services where as guilty of horrific torture, premeditated maiming and atrocities as all other secret services around the world.