Who is Thomas McFarlan?

The first and only time Dr. Horton spoke to Thomas McFarlan was on 2 March 2018 when the two had a 2 hour Skype conversation about targeting, see Skype evidence below. In that conversation McFarlan claimed that he was unemployed and living at his mother’s home. Also, unlike the profile image he uploaded of himself that is shown here, he had long hair. 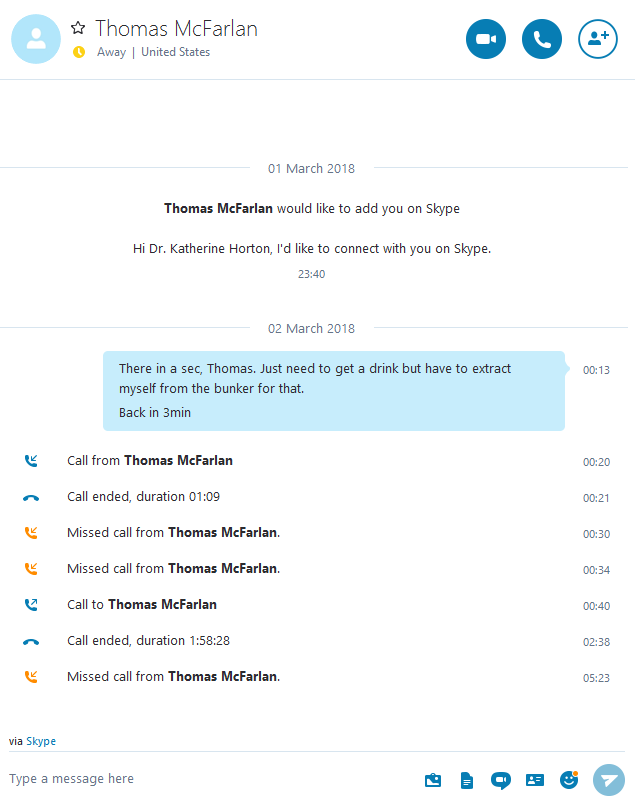 At the time Thomas McFarlan levelled the libellous accusations against Dr. Horton, the only public work he had undertaken were a few articles on Medium.com on a variety of topics. The libel videos where his first uploads to YouTube. It is against this background of rather sparse productivity and non-existent campaign work for the victims of targeting and in contrast to the ferocious accusations that McFarlan levelled at Dr. Horton without a shred of evidence and without ever having worked with her, that in Dr. Horton’s view Thomas McFarlan is an extremely dubious character.

On 3 August 2018, Thomas McFarlan contacted Dr. Horton after the break-up of the Techno Crime Fighters Forum to give his view on the matter. The exchange was friendly and there was NO SUGGESTION that McFarlan thought that Dr. Horton was a

as he would claim 3 weeks later without any further exchange between McFarlan and Dr. Horton, which leaves one to wonder where his sudden earth-shattering insight is coming from.

They were in fact the first and only videos to be published on his YouTube channel at the time. Two videos on Targeted Individual topics were added later. 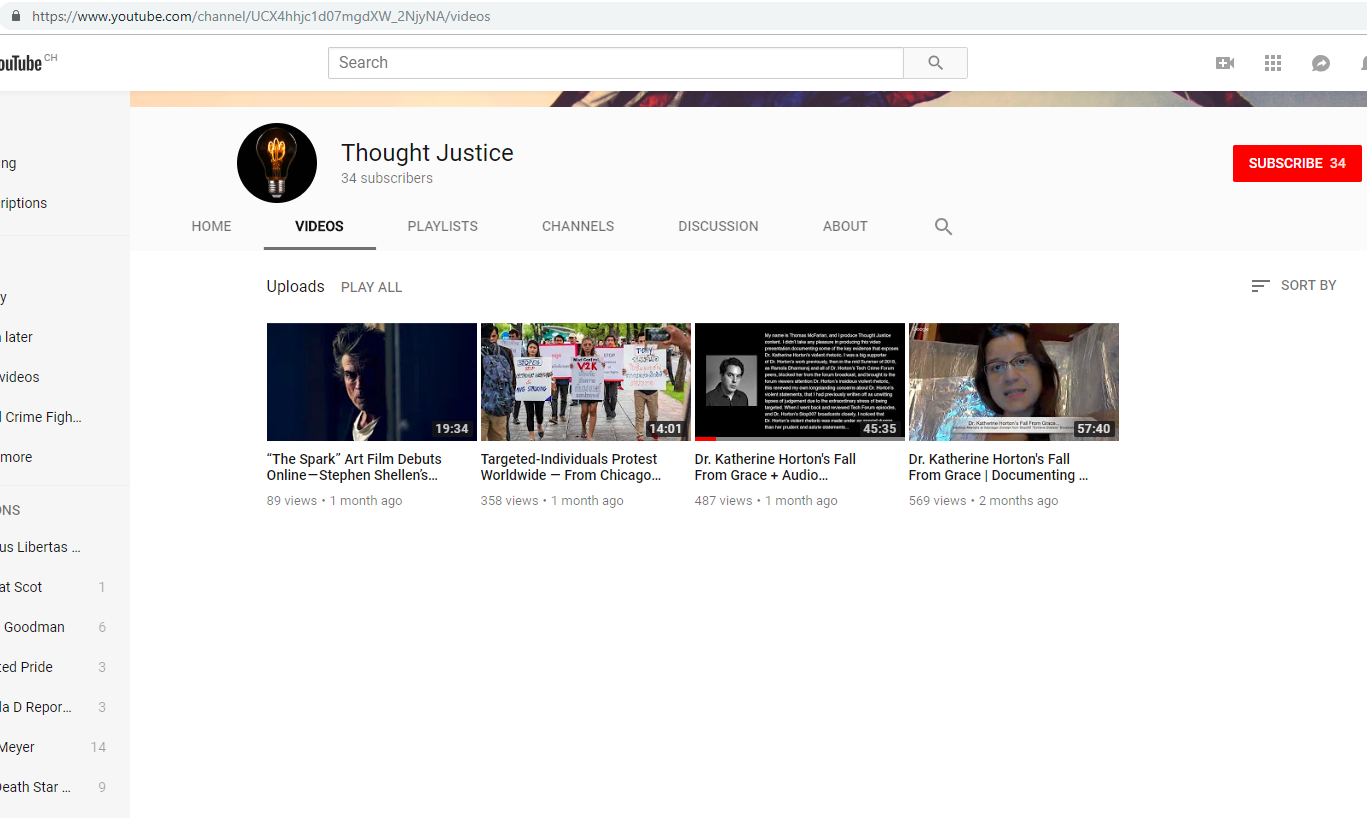 In the defamatory videos, he claimed firmly yet falsely and without valid evidence that Dr. Horton was an infiltrator and an impostor who was trying to harm the cause of victims with malicious intent. The libellous statements also included a long list of defamatory and baseless claims in the description below the videos and in commentary section in response to viewers’ doubts about the veracity of his claims.

This is a list of examples taken from the statements below the first video:

The full list of defamatory statements by Thomas McFarlan against Dr. Horton from 26 August 2018, quoted above, can be found here:

Shortly after the posting of the above YouTube videos, Thomas McFarlan continued spreading the libellous remarks about Dr. Horton on Twitter. 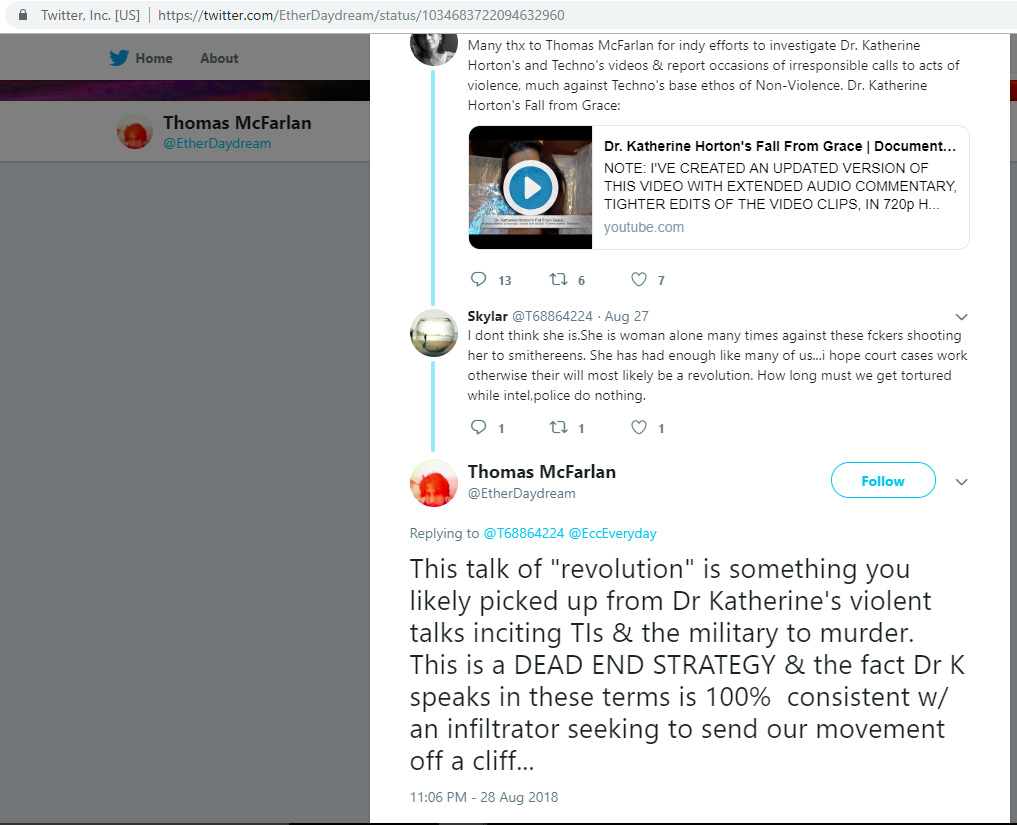 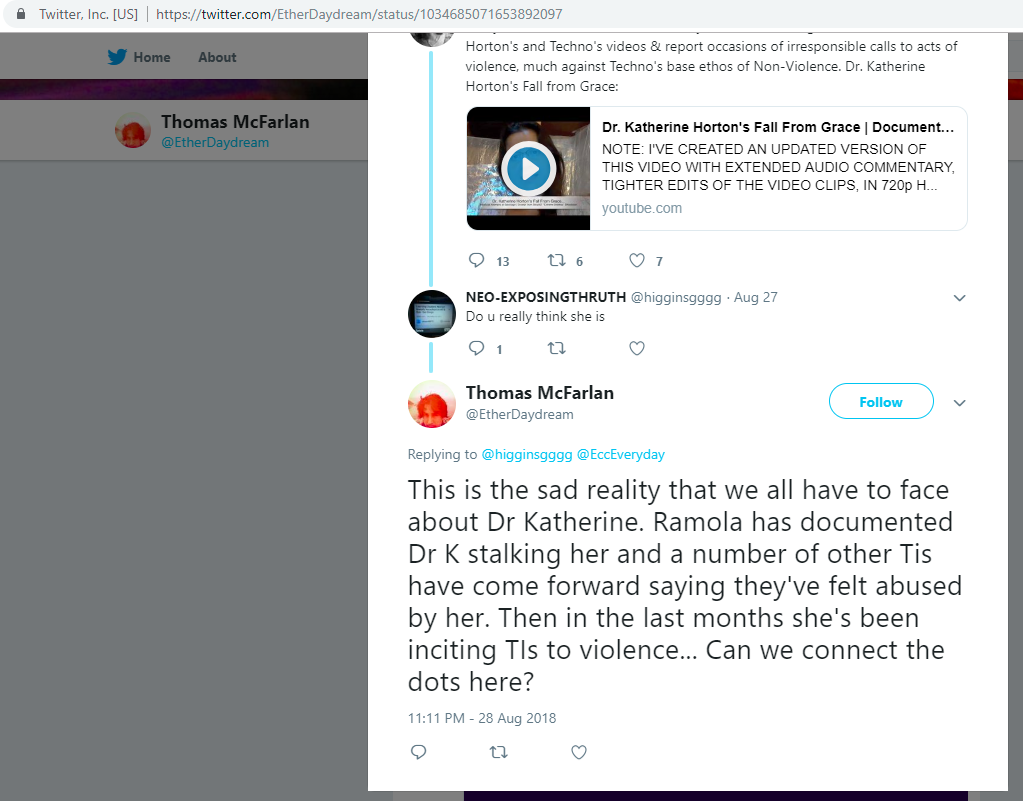 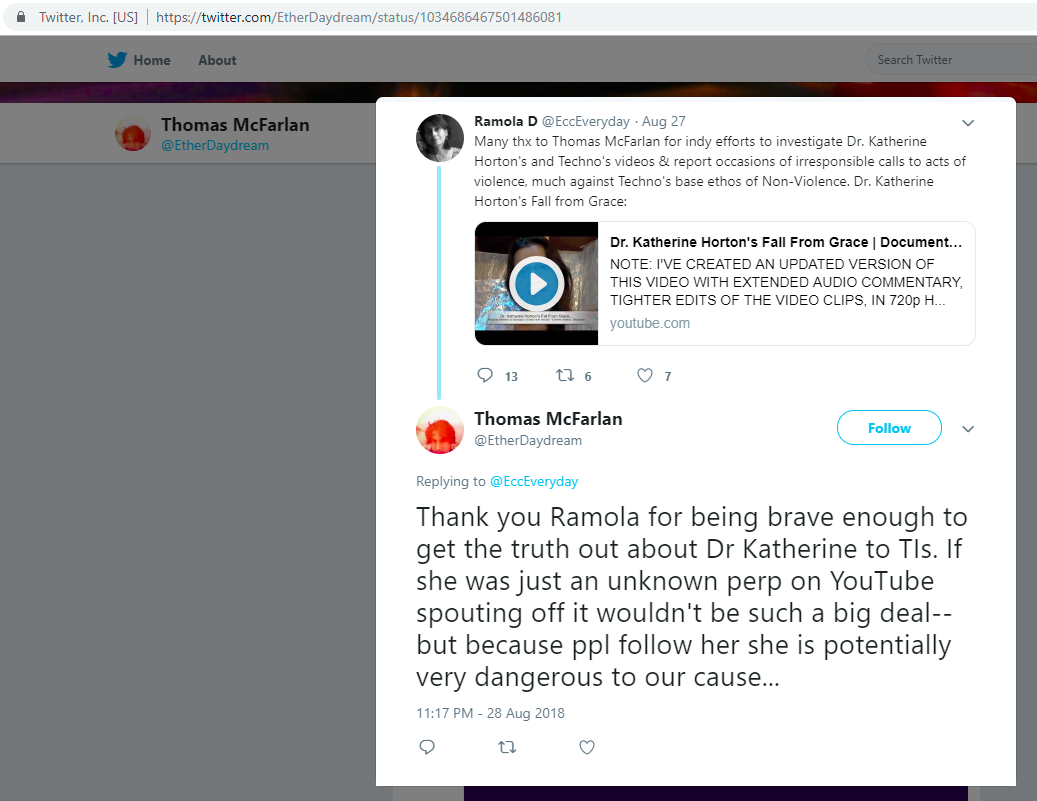 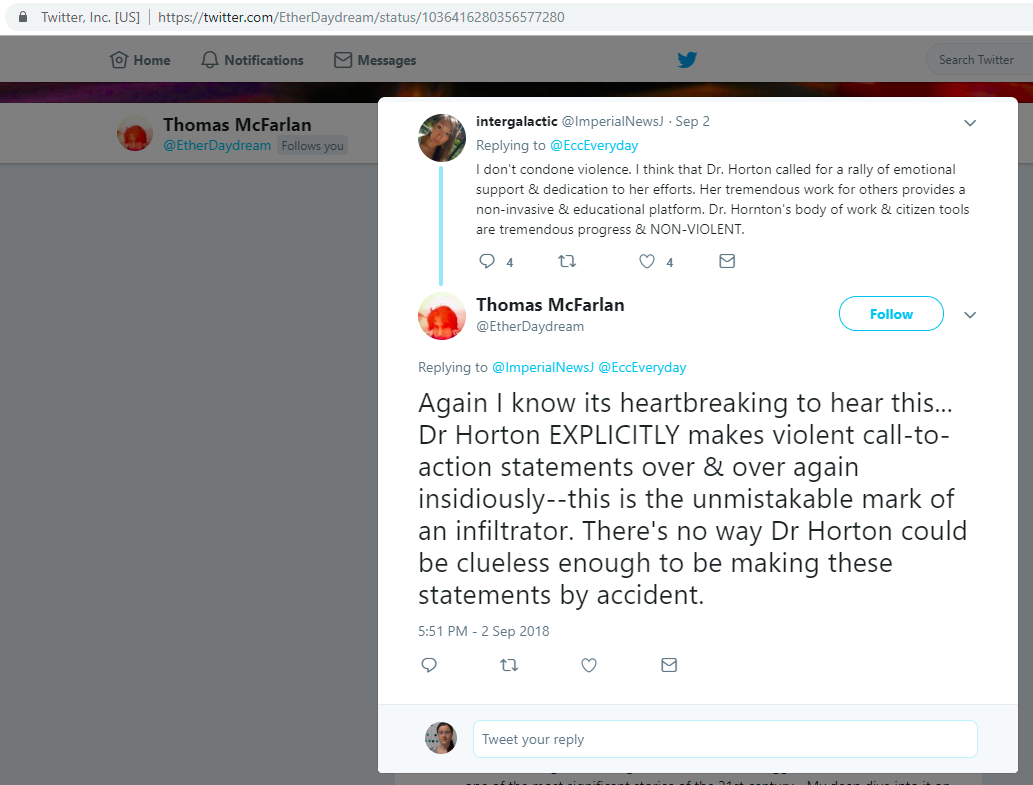 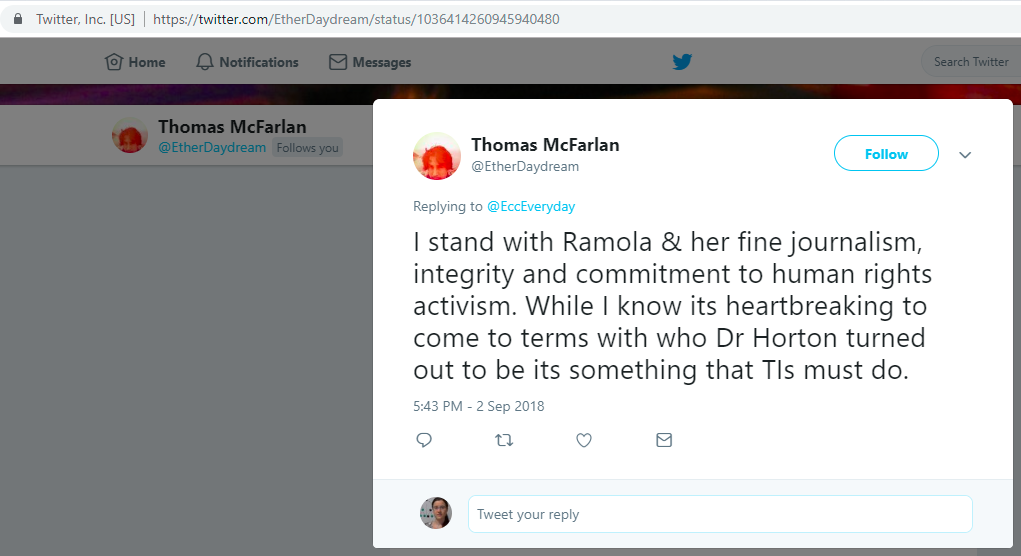 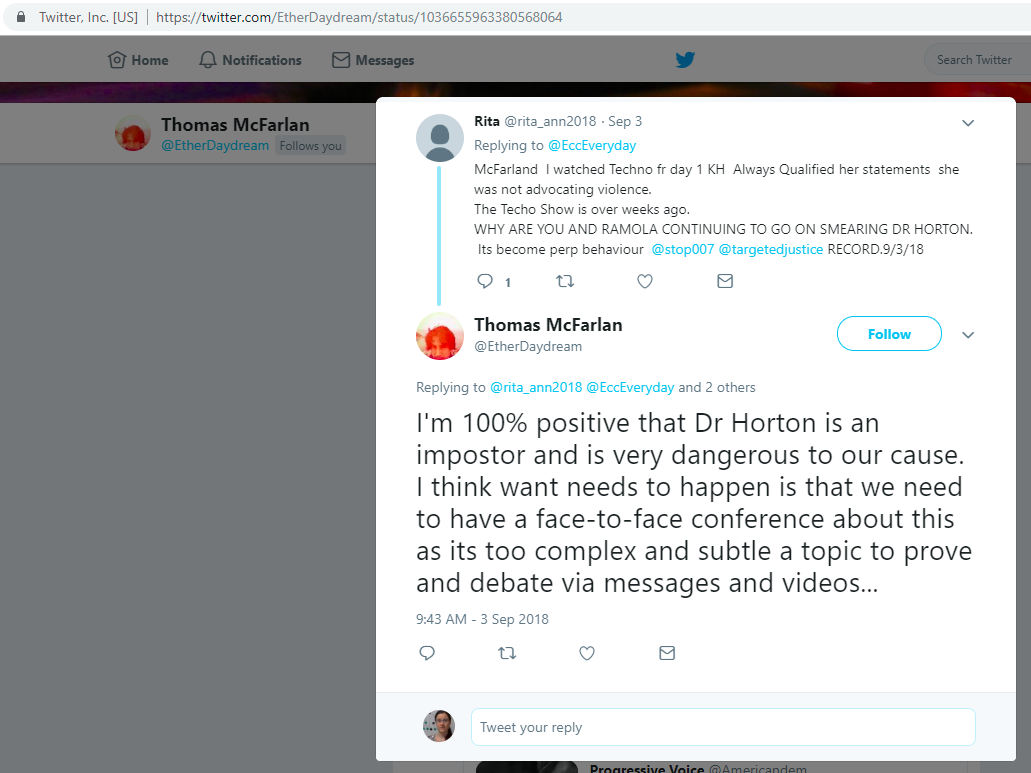 The defamation of character by Thomas McFarlan was immediately spread by Ramola Dharmaraj on her blog The EveryDay Concerned Citizen without giving Dr. Horton a right to reply to the libellous statements.

After feigning a two-faced “heartbreak to all of us who know or have known and worked with Katherine Horton“ in her blog entry, Ramola Dharmaraj proceeded to libel Dr. Horton by claiming having suffered from her “own rising discomfort with non-verbal and verbal signalling comprising “echo-stalking” or mimicking/mirroring from Katherine over months, and the very real issue and prospect of insidious infiltration among dedicated, peace-focused activists of an agent provocateur, “Intel plant,” and saboteur.” Despite claiming to be a “real journalist”, Ramola Dharmaraj didn’t provide a shred of evidence for her ludicrous claims that went in the face of 1.5 years of close collaboration with Dr. Horton and Dr. Horton’s published evidence of the attacks on her and her family and her court case trying to protect herself.

It became clear that Ramola Dharmaraj was more than happy to throw out proper journalism and Dr. Horton’s rights when she felt that she could launch a take-down operation on Dr. Horton, who she felt was in the way of her personal future plans and gains.

This turned out to be just another attack on Dr. Horton’s reputation and rights by Ramola Dharmaraj in a long campaign of malicious defamation.

During the two months following the defamatory statements, Dr. Horton was heavily under attack and had to conduct a house move at the same. During this period, the community had sufficient time to listen to the claims and make up their own mind regarding the accusations against Dr. Horton without Thomas McFarlan’s views being censored in any way by Dr. Horton. Thus, it cannot be claimed that taking down the videos infringed on Thomas McFarlan’s right to free speech in any way.

On 9 November 2018, when Dr. Horton finally had the time and physical capacity to respond to the character defamation, she requested in writing that Thomas McFarlan remove the maliciously defamatory videos from his channel, not least because McFarlan had violated Dr. Horton’s copyright by using 16:18min of her video material without permission in his defamatory videos.