For the full list of FAQ please see the information pack below.

Is complaining about the secret services crazy?

No. The people who do are simply the victims of a very large system that commits unlawful or criminal acts at least as often as large companies do. This is why victims are no more unusual than people who claim to have been defrauded by their telecommunication company or their insurance provider.

Is it schizophrenia or paranoia?

No. As you can see yourself below, the people who say that they are being attacked with secret service methods (gang stalking, electromagnetic harassment and bio-terrorism)  are 70% women. In contrast, schizophrenia and paranoia sufferers are 60% men. Even if it were “only” due to human experimentation you would expect an even distribution since one would want to collect information on both sexes equally.

When you listen to the victim testimonies, you discover that there is a strong element of sexual sadism that is inflicted upon them. This, combined with the fact that the sex ratio looks more akin to that of rape victims, directly indicates that they are in fact suffering at the hands of sexually violent and mostly male perpetrators.

[2] That victims are 70% female is also confirmed by Dr. John Hall and the charities Stopeg and ICATOR.
[3] Paranoids and schizophrenics are 58% male, see:“Schizophrenia is diagnosed 1.4 times more frequently in males” (Wikipedia: Epidemiology of schizophrenia). (Cashed link)

How do I know if I am a victim or Targeted Individual?

It is a learning curve for all of us to understand what is happening around us and how it affects us. A good start, if you think that you are a victim is to have a look at the affidavit template for victims to see what type of offences are “normal”, or rather “Standard Operating Procedure” within this crime cartel.

Skip past the formalities and start reading on page 6 or 7. If you find that you can tick several boxes or you find yourself ticking many boxes, you are clearly a targeted person as the statistical likelihood of suffering all those offences and incidents together is as good as zero in “normal life” (meaning for the vast majority of the population). However, for targets all of these occur at extremely high rate.

Another indicator is that if you suffer systematic damage or deterioration to your health or good looks, it also implies targeting as these sick degenerates love to mutilate victims for sport. Another indicator is systematic destruction of your finances, your social life or your marriage and family life. Check out the affidavit template here below.

What do I do if I find out that I’m a victim of this?

You can use the returned affidavits of other victims to show to the police, doctors, and your family and friends to explain to them that this is not just happening to you, it’s actually a MASSIVE global criminal operation and you need all their help!

The affidavits that have been returned by other victims have all been made under oath and have been submitted with photo identification such as a passport, ID card or (where none of those are available) a national drivers licence. Due to the high standard of those affidavits, you can download them to use them as supporting evidence for your own court case.

Are these Secret Service crimes normal?

Yes. Every decade of the 20th century, the secret services and military went on a psychopathic rampage in which they senselessly mutilated and murdered the population incapable of stopping themselves. As we now know, each time it was planned, commissioned and financed by large corporations and the banking dynasties behind them. It always took a concerted effort, many court interventions and sometimes a world war to reign them in.

Now, we have once more the case that the intelligence agencies are rampaging and torturing people with implants, nanotech and neurotech and mutilating them to death with microwave weapons. The secret services are headed by men groomed for their ruthlessness. They are so corrupt that they will not make these out-of-control thugs stop, despite repeated public requests to cease and desist, multiple court cases and reams of public information broadcast often LIVE about these insane attacks. It therefore appears to be a global death camp program.

Is the police involved?

Yes. The murdering spree of the intelligence agencies is always accompanied by the corruption, subversion and effective suspension of the police force. That is exactly what we observe today as the police around the world refuse to investigate all crimes related to modern electromagnetic weapons, implants, nanotech and neurotech. All victims to date who approached the police were turned away, ignored, ridiculed or victimized even further by criminal police officers whose thuggishness and ruthlessness in many cases outdoes the criminals they are paid to fight.

How can so many people be involved?

Simple. There have been tax advantages to becoming an informant for a very long time. For example, in Germany, there is something colloquially called the ‘Spitzelsteuer’. This is a preferential tax rate of only 10% for anyone who works as an informant for the police or the intelligence agencies (see the famous German tax guide Konz – Das Arbeitsbuch zur Steuererklärung 2011/2012 by Franz Konz, p.60). This is in a country where the tax rate for anything above  EUR 10 000  is more than double this (23%) and goes up steadily to more than four times this (42%) at EUR 50 000. Incentives like that invariably recruit more and more people! This leads to a run-away process of relentless expansion. There are similar arrangements in other countries.

How can they be so deranged?

This is what others are said to have said about MI5 and MI6: 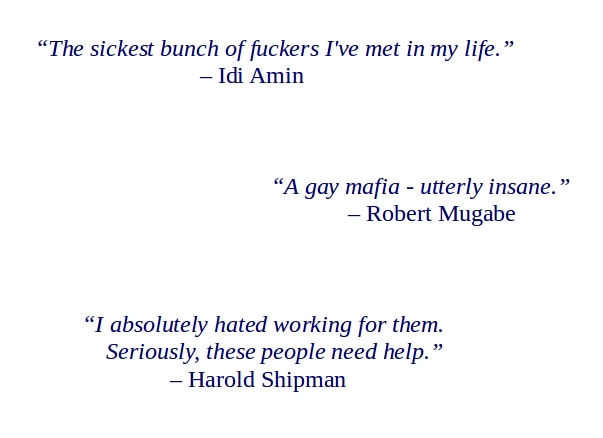 [not all real quotes]

The scary truth is that at least 1% of the population are clinical psychopaths. These people have no empathy and are driven by an insatiable lust for power and control over others. Furthermore, 10-20% of the population are sadists or feel sexual arousal watching sadistic acts. The secret services attract these people like a magnet since under the cover of secrecy they can live out their predilections.

The pyramidal hierarchy of these organisations as well as their strict compartmentalisation (need-to-know principle) result in sadistic psychopaths capturing sections and climbing to the top. At that point, the organisation falls into Deep Capture by these disturbed individuals.

This is a statistical process but entirely predetermined by the points above. Therefore, it is not a question of ‘if’ but rather ‘when’ this will be the case. Unless an organisation takes active steps to weed out psychopaths, which the intelligence agencies don’t (much the opposite actually), Deep Capture by psychos is the end result. This happens in every country. And eventually, these psychopathic systems collaborate and then merge. Thus, what victims describe is not in the least surprising to a systems analyst. It is what you should expect.

How can they pull it off?

As explained above, with time any informant will try to get his wife, parents, children and friends to become informants as well in order to save a killing in tax. In East Germany under the Stasi 1 in 6 people were informants. So, if victims tell you that someone snoops on them or starts playing theatre wherever they go, that’s how it’s done. Ok, and if you become an informant what then? Well, then you can be called upon to inform on people and perhaps also do the odd job here and there any time.

If you’re an informant, you might be asked to place a tripod in your flat with a funny black thing on top that looks like a telescope. You are told that the people next door are “monitored” with this. Unbeknown to you, they are actually being irradiated with focussed microwaves that damage their inner organs and wreck their lives. It’s simply controlled remotely through a computer. Would you be clever enough to work out what that device actually does? Nor would other people.

How many such devices could you plant? Well, how many of your neighbours would love to make some money by simply putting a tripod with a funny telescope next to a window? Exactly. So, when you hear victims say “I am being shot at from 3-4 directions“, ask yourself if you could find 3-4 neighbours in your vicinity who would like to earn money.

Couldn’t you also plant some of these tripods in flats along junctions and main streets? Couldn’t you trigger them when one of the many identified victims in a city walks past? Sure thing. Could a targetting software identify a victim’s head from a distance (for example like the little squares on our digital cameras that identify heads even if the people stand 50m away)? Easy. Could you then perhaps also centrally collect the total dosage a victim receives throughout the days and weeks and feed it back into weapons research studying the effects of “non-lethal” weapons on humans? Yes, kaching!

If you are free during the day because you are, say, a pensioner, university student, school student, unemployed or a mother with a young child, then you could also pop outside to track somebody for a few hundred meters or for 10-20min, couldn’t you? And if you were then also provided with a free mobile phone or even just an app that you can download on your phone through which your tracking task would be organised then it would be even easier.

All you would have to do is to pop outside briefly when you get a message on your app with an image of the person you are meant to be tracking and the direction in which they are heading (e.g. “woman in red jumper with white shopping bag walking down Stalking Street in the direction of Train Station, see photo attached”, a minute later: “walking past you now”). Then you could take over the tracking of that person and after a while pass it on to the next stalker etc. Of course you would get paid for this.

It would be even easier if the app had a little map with a flag icon (like Google Maps maybe?) for the person you are stalking and then you could just push the flag along the map as you are tracking outside and all other stalkers would know where to join in. Don’t worry, if you happen to lose that person, there would be at least 2-3 parallel stalking threads along side you, who are following the same person and pass it on to an independent set of gang stalkers.

Does that sound confusing? Don’t worry, the separate stalking groups can be colour coded so that you don’t get mixed up, e.g. Group 1 in beige or green tops, Group 2 in red or black tops etc. So that you can distinguish your team Beige-Green from the other team Red-Black.

The following is an information pack for victims. It contains simple steps of what you can do to fight the attackers. You can download the PDF-files and use them to hand out to family, the police or other officials as information to help them understand your case and the criminality you are up against. You can also use these documents for your court case or group litigation.

ALL THE DOCUMENTS HERE ARE FOR DOWNLOAD
AND FREE USE TO HELP THE VICTIMS.

More advanced information can be found on the website of the Joint Investigation Team (JIT), the investigative team that Dr. Horton founded at the start of 2017. Some introductory documents from the JIT are below. There is also an online version of the Equipment List found in the PDF below.

Instructions for Fighting Back

For further information checkout the What-to-Do for Victims and the Research Library.